The 2020 Nitto ATP Finals, played for the final year at The O2 in London, has marked the end of a remarkable 12-year run in the English capital for the prestigious season-finale of the ATP Tour.

Played on the 50th anniversary of its inaugural edition in Tokyo in 1970, this year’s tournament once again provided a thrilling close to the season, with the top four players in the FedEx ATP Rankings reaching the semi-finals for the first time since 2004. In the final, Russia’s Daniil Medvedev defeated Austria’s Dominic Thiem 4-6, 7-6(2), 6-4 to claim the biggest title of his career. In doubles action, Wesley Koolhof and Nikola Mektic triumphed over Jürgen Melzer and Edouard Roger-Vasselin 6-2, 3-6, 10-5, to capture their first title as a team.

Medvedev’s victory bookends the tournament’s time in London with Russian champions, following compatriot Nikolay Davydenko’s triumph in 2009. It also marks the first time in tournament history that any player has defeated the top three players in the FedEx ATP Rankings, with victories over World No. 1 Novak Djokovic and World No. 2 Rafael Nadal in addition to World No. 3 Thiem. 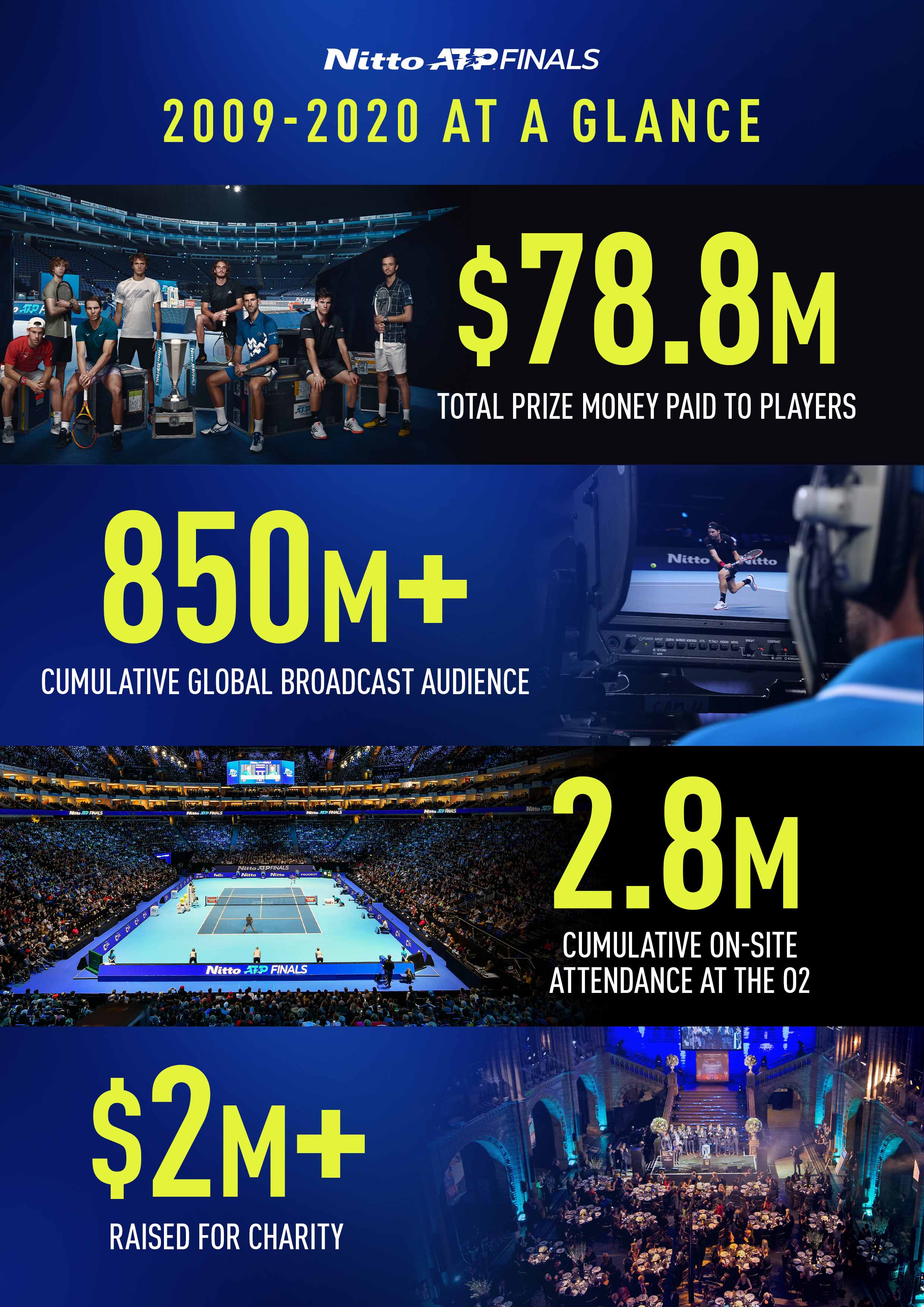 Since moving to London the event has welcomed more than 2.8 million spectators and generated a cumulative global broadcast audience of over 850 million. The tournament’s status as the crown-jewel of the ATP Tour season has been further underscored by long-term commercial support of globally renowned brands.

This year’s event also capped off a challenging ATP Tour season, which was suspended for five months in March due to the COVID-19 pandemic. Since restarting in August, a total of 16 ATP Tour and Grand Slam events were staged, bringing the prize money total for the season to US$120.8m. 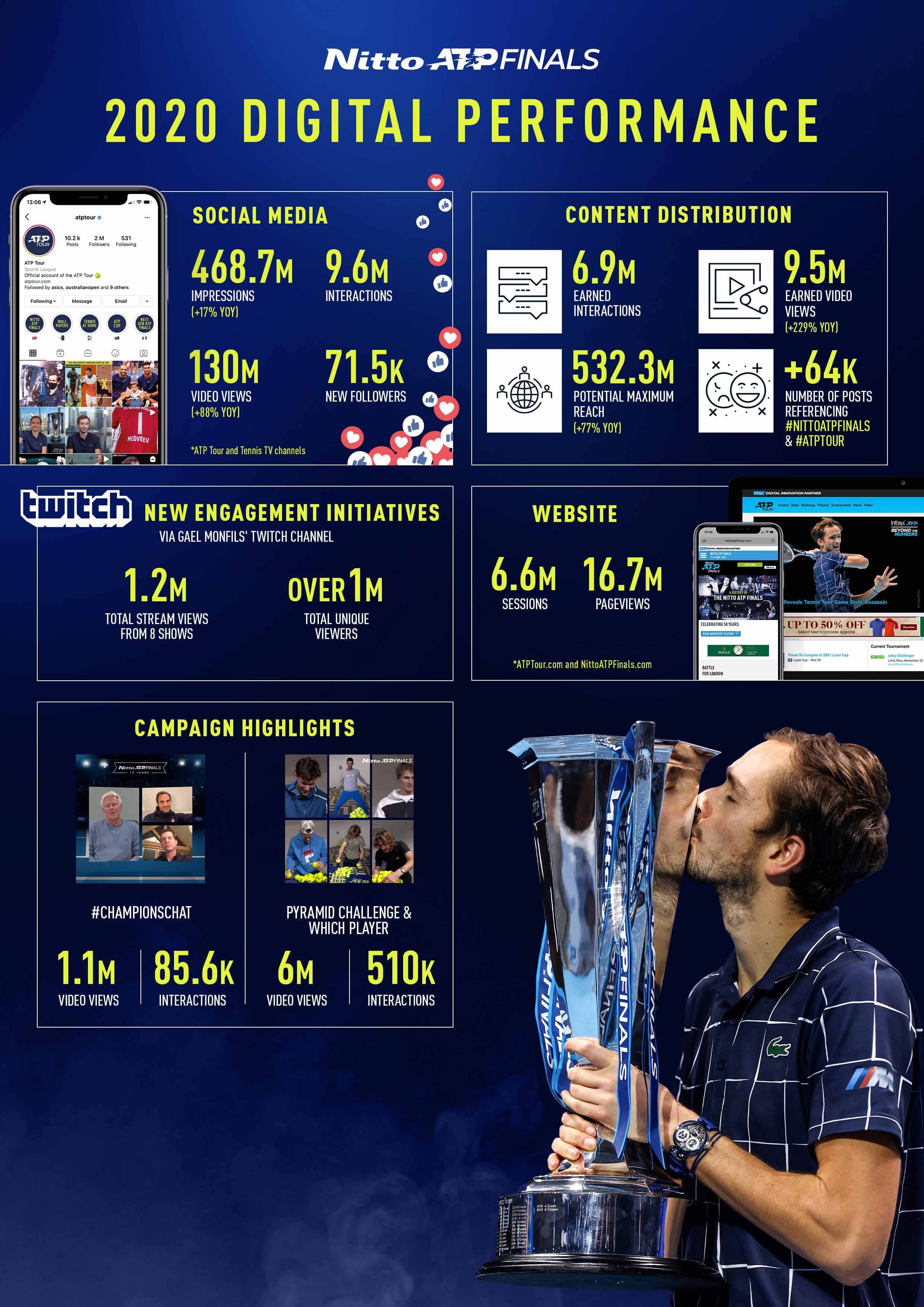 Andrea Gaudenzi, ATP Chairman, said: “Bringing tennis back to our fans this season has been a huge collaborative effort. Witnessing the professionalism and dedication of the world’s best players competing their hearts out last week at the Nitto ATP Finals, in an empty stadium, is something I will never forget. The players deserve all the credit. We wish fans could have been with us to celebrate the event’s 50th anniversary, however the ATP will always remember the 2.8 million passionate spectators that came through the gates of The O2 over the years. London has been an incredible host, and I would like to thank AEG and all our event partners, in particular Nitto, without whose support this event would not have been possible.”

Alex Hill, President & CEO of AEG Europe commented, “I’m enormously proud of everything AEG and The O2 have achieved over the past 12 years with the ATP on our partnership for the Nitto ATP Finals, and wish them and the city of Turin all the best as the event moves to Italy. Hosting this prestigious event has cemented The O2’s position as a major international sporting arena and we look forward to a busy calendar of new and returning sports events over the coming years.”

From 2021-2025, the Nitto ATP Finals will relocate to its new home in Turin, Italy, with the continued commitment of title sponsor Nitto.

BY THE NUMBERS: 2020 NITTO ATP FINALS

• 8,000 – masks donated by Nitto for the event to protect players and their entourages, officials, drivers, security personnel and staff

• 2,000,000+ – amount of money raised ($US) for charity, in aid of the likes of Cancer Research UK, Great Ormond Street Hospital, Save the Children and UNICEF