Christmas in New York is a very special time in the city and arguably the most wonderful time of the year. When being in New York during Christmas you will see Christmas decorations and Christmas Lights all over the city and there’s the famous New York Christmas Tree at Rockefeller Center which attracts masses of visitors daily. And don’t forget to visit the Christmas Villages, Dyker Heights and the Ice Rinks!

So if you are looking for the best locations and events to enjoy the Christmas time in New York don’t look further – with our Guide to Christmas in New York we got you covered!

It’s the most wonderful time of the year. If you happen to be in New York City on Christmas, you’re not going to regret it. There is a reason why the city has been featured on endless TV shows and blockbusters during the holidays. Christmas in New York is magical and there are many different ways to get into the holiday spirit in NYC.

Here is what we recommend doing on Christmas in New York:

This is something you can’t miss during the holiday season in New York City. The famous Christmas Tree at Rockefeller Center is the highlight during Christmas in New York. What most of the visitors only know from pictures or movies comes to reality during that special time of the year. The annually Tree Lighting Ceremony is always a big event with live performances until they light up the tree around 10 p.m. for the season. There’s even a Rockefeller Tree Lighting party where you won’t have to wait for hours in the crowds to see the tree in full effect!

This year, the lighting of the tree ceremony at Rockefeller Center will take place on Wednesday, December 1st, 2021.

Christmas in New York can be overwhelming when you’re not familiar with the city too much. During Christmas time there are a couple of tours we can highly recommend doing to completely zone into the Christmas atmosphere in the Big Apple. Decorations and lights in the city remain unparalleled, there’s simply nothing just like this. The best way to explore the magic is by taking a NYC Christmas lights tour.

Depending on where you’re traveling from your experiences with holiday markets might be a little different compared to what you’re gonna see in New York City. As a German expat living in New York, I found it very interesting that there are no such things as “Glühwein” or anything like that on the best Christmas Markets in NYC. Holiday markets in NYC mainly sell handmade goods, accessories and of course food. The Bank of America Winter Village at Bryant Park is one of the most famous markets in the city.

Another great holiday market in the city is the Columbus Circle Holiday Market. This one offers a romantic atmosphere with over 100-holiday booths (Address / Entrance: Central Park South at Central Park West).

A little more Downtown the Union Square Holiday Market has more of a European feel to it. More of how I remember holiday markets in Germany. Besides the 150 food vendors, New York artists are also stationed here and show off their skills (Address: 14th Street to 17th Street, between Broadway and the southern Park Avenue).

Right after Thanksgiving in New York, the city is decorated with wreaths, holiday signs, and bright lights. Each year, New York City department stores design their entire window displays and usually has a theme. You can tell department stores put time and effort into these decorations. There is a lot of detail that goes into the Holiday Windows in New York.

Of course, this is not just something special for New York tourists. Strolling through the streets of New York and admiring the beautifully decorated holiday windows is something you shouldn’t leave out during Christmas in New York.

Radio City Music Hall is a well-known concert and event hall located on Sixth Avenue and can be recognized from a distance by its striking exterior lighting. Throughout the year, concerts and events take place here such as the popular Radio City Christmas Spectacular. This is a classic Christmas in New York. I’ve watched it before and it’s exactly what you would expect from a Christmas show in New York City.

Over 140 sensational dancers perform in pure Christmas spirit here for 90 minutes. Sparkling costumes, a unique stage set and loads of Christmas songs inspire audiences every year. The stars of the show are Santa Claus and his elves, “The Rockettes”. The Rockettes have the reputation of being one of the best dance groups in the world! Prices start at as low as $32.

Ice Skating is a big thing during Christmas time in New York. The most famous ice rinks are the ones in Bryant Park, the Rink at Rockefeller Center with the Christmas Tree in the backdrop and of course the famous Wollman Rink in Central Park. Here is more information about the Ice skating in NYC and their different prices.

New York City is known for being home to the world’s best shows, so what would the holiday season be without watching some of the best Christmas shows? There’s no better way to get into the holiday spirit than to explore the city’s holiday decorations and watching a festive show!

Here we tell you what the best Christmas Shows in NYC are!

Why not spending time on a Christmas Holiday Cruise during Christmas in New York? Both locals and NYC visitors love the amazing Christmas Cruises New York City has to offer. 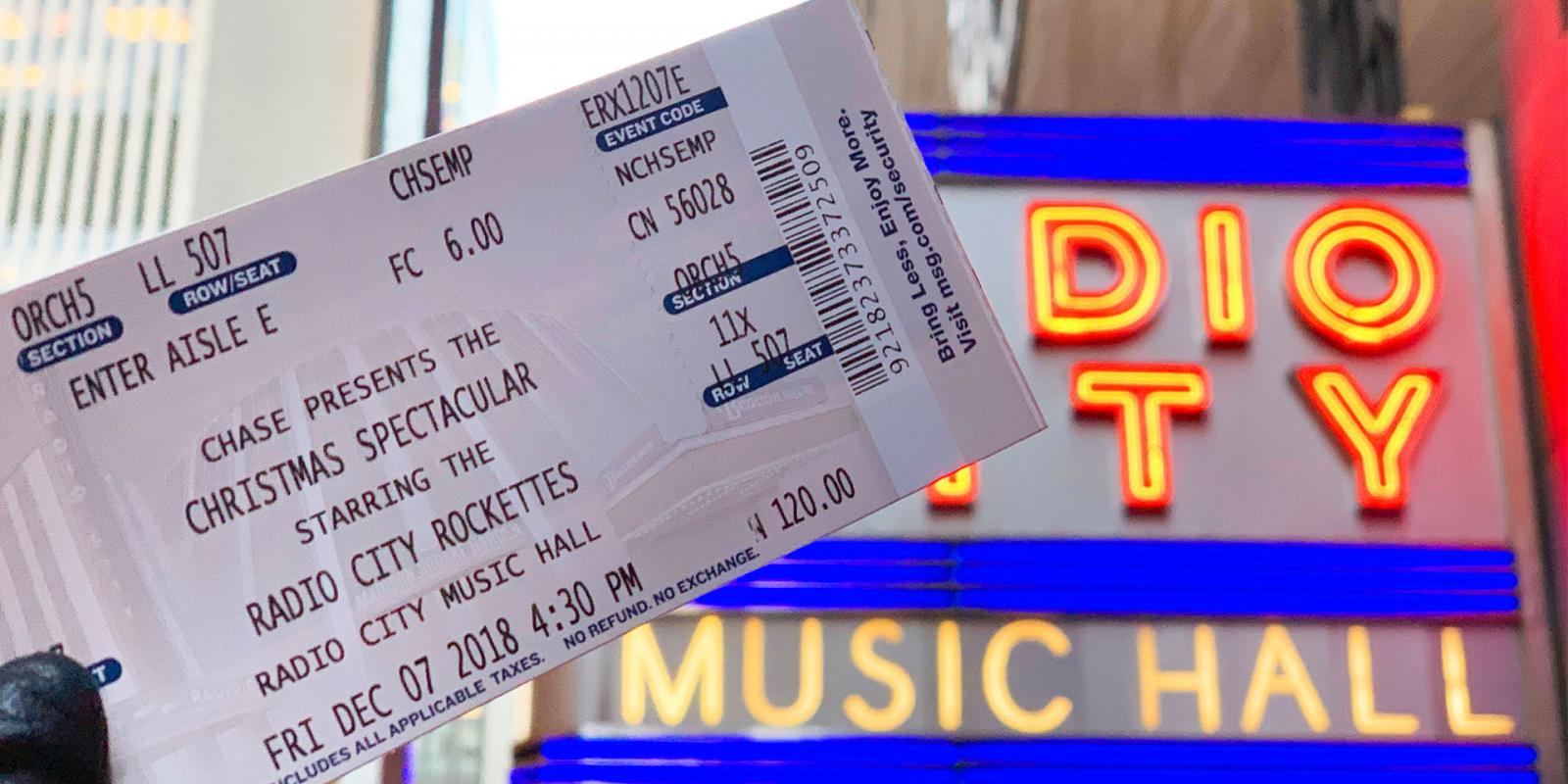 Christmas Shopping won’t be complete if you’re not going to see Macy’s Christmas decorations, the 9th floor, better known as “Holiday Lane” and famous Santaland on the 8th floor. Here you can find the most amazing Christmas Decorations. Christmas at Macy’s is very popular for its Holiday Lane at Herald Square. Shop some of the most glittery Christmas Tree decorations, memories that will last for a lifetime.

You can actually set up a date with Santa Claus in NYC by visiting the Macy’s website and reserve your desired time slot. We’ve visited Santa this year and had such a blast.

Where to eat at Christmas in New York

Is Christmas a good time to visit New York?

If you don’t mind winter weather and are willing to bring a bunch of warm clothes and jackets with you, December in New York will be a great time for you to visit NYC. If you enjoy Christmas and everything that comes with it, New York is the place to be!

What open in New York on Christmas Day?

Does it usually snow in New York at Christmas?

Even though we can’t predict the weather, it is a safe bet to state that it will snow at some point during the Christmas season in NYC. Regardless of the snow, NYC sure is a Winter Wonderland during the holiday season. It doesn’t matter if it snows or not.

Is Christmas in New York worth it?

Absolutely. If you’re wondering if Christmas in New York is any good we can only assure you that it is just like you would expect it after watching all the Christmas movies that were filmed in NYC. Everything is decorated and there are Christmas trees wherever you go. There are so many things to do at Christmas time in NYC that you will be surprised how wonderful Christmas in New York really is.

When does Christmas in New York start?

Christmas in New York usually starts right after Thanksgiving when the city is slowly changing into a Christmas wonderland. With the Christmas tree lighting ceremony, the holiday season officially begins and there is not a single neighborhood in NYC that doesn’t look like Christmas.

Where are the Christmas balls in NYC?