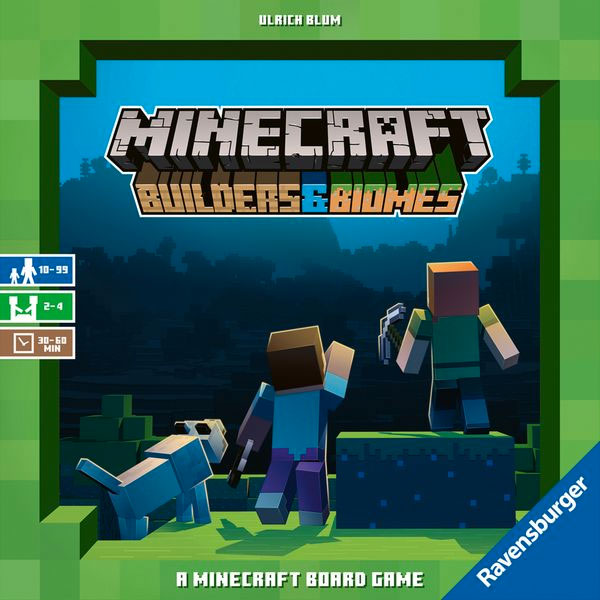 If I were to poll people in the street, I would guess that at least 85% of those I polled would at least know something about Minecraft. It’s been released on nearly every major console, including phones, and is the best-selling video game of all time, passing Tetris in May of 2019. I have played no more than three hours of Minecraft, but am familiar with the style based on playing many similar games such as Terraria.

There isn’t a traditional mainboard for Minecraft: Builders & Biomes. Sixteen stacks of tiles are placed in a 4×4 grid with 16 treasure tiles surrounding the grid. Players receive a personal player board where many of the tiles can be placed. Nearby, there will also be a stack of wooden blocks that form a 4x4x4 cube of different colors. The players pile their respective standees at the center intersection and the player who most recently found a diamond in Minecraft (yes, the video game) goes first.

On a turn, a player takes two actions, and they must be different. There are five options, which create multiple routes for scoring. The main action a player will be doing is moving 0-2 spaces along the intersections of the tiles. After the movement is finished, all the unrevealed tiles are flipped to show if they are buildings or mobs. Players can collect two blocks off the cube if the top and two additional sides are visible. Those blocks can be used to meet the condition of a building that their standee is touching. That building then goes in any spot on the player board, even on top of a previous building.

Related: How Long Is 1 Tick In Minecraft, What Is Minecraft Tps

The other two actions involve fighting the mobs. Players can collect treasure by making it to the outer edge of the grid to collect a weapon, hidden in a treasure chest. These are then used to fight the mobs revealed in the grid. Each mob has a number of hearts that represent their health. Players start with five basic weapons tiles, and they are shuffled along with any of the new weapons added from the outside of the grid. Players draw three tiles, and some of the advanced weapons may give players another tile, experience points (aka victory points), or a block from the cube. If the number of hearts on the weapon tiles is equal to or greater than the mob’s, it is defeated and EXP is gained, as well as some specialties based on the mob.

This continues until the entire top level of the cube has been claimed. At that point, play stops, and the players will score based on a group of biomes that buildings are within. The same thing happens once the next two levels are cleared, but for two different items and buildings. Some final scoring opportunities could come from defeated mobs, and whoever has the most EXP wins.

The biggest strength Minecraft: Builders and Biomes has going for it is the ability to play as you desire. Now I’m not saying this is a sandbox game. It’s one that allows players to fully specialize on either of the two strategies or do a blend of both. Are you a player that loves to fight any and everything that moves? Then go pick up some new weapons and rush across the map to fight mobs that award immediate EXP. If you aren’t about that combat life, then continue to pull cubes that complete buildings that will help you score during the three scoring phases.

A balanced strategy might be the best route for victory because defeated mobs can offer endgame EXP for having buildings of particular biomes, materials, or types built on the player board. Combat is also a risk. You never can remove the three eggs that start in a player’s stack of weapon tokens. They are weapons that have zero hearts, so basically are a dead draw when fighting a mob. There is always a chance of drawing eggs even after collecting some of the upgraded weapons.

The components are a mixed bag. The tiles are an appropriate thickness, but the player boards are cardstock (think the thickness of single MtG or Yu-Gi-Oh card), which is a bit of a knock on the game. It comes with 64 heavy-duty blocks that are easily formed into a cube using a cardboard support structure. At times though, it is difficult to tell the difference between black and brown cubes on both the tiles and the wooden blocks. Outside of those color difficulties, the art is all pulled from Minecraft, so fans of the blocky buildings and pixelated dirt will get a kick out of it. Others will shrug and comment that they’ve seen better from board games.

Minecraft: Builders & Biomes is not difficult to learn, play, or teach. The rulebook is six pages, and most of the explanation will be dedicated to the three scoring phases, which are easy to understand once showing a building tile that has the three symbols for each phase. The box says for ages 10 and up, but I seriously think that most 7-year-old children can understand the game. My mom has students that are of this age, and adore Minecraft. If they can understand the video game, I think Builders & Biomes is less of a stretch for them to parse.

Outside of families with kids, this might be a little basic for gamers that have played even medium-weight games. When seeing a walkthrough for Builders & Biomes, I hoped it would feel like an adventure game, where I could build structures or fight baddies, kind of like what most people get from 2018 release Vindication. In many aspects, it feels less like an adventure game and more a Eurogame with “contracts” to complete and actions to select. And that is ok if you understand what Builders & Biomes is before buying/playing it.

Minecraft: Builders & Biomes is not a deep game, and it doesn’t try to be. It gives you some actions that can provide for alternate strategic routes. The theme fits, but the board game doesn’t feel like the open-world juggernaut that the video game is. The game is straightforward and at times a little too basic for anyone that has moved on from family games. For parents with kids that love the video game, Minecraft: Builders & Biomes should be a fun way for them to enjoy the intellectual property in a different form.

Final Score: 3 Stars – An easy game to teach with a breezy feel, but not enough meat on the bones to keep gamers playing it regularly. Parents with kids that love Minecraft might give this a look. 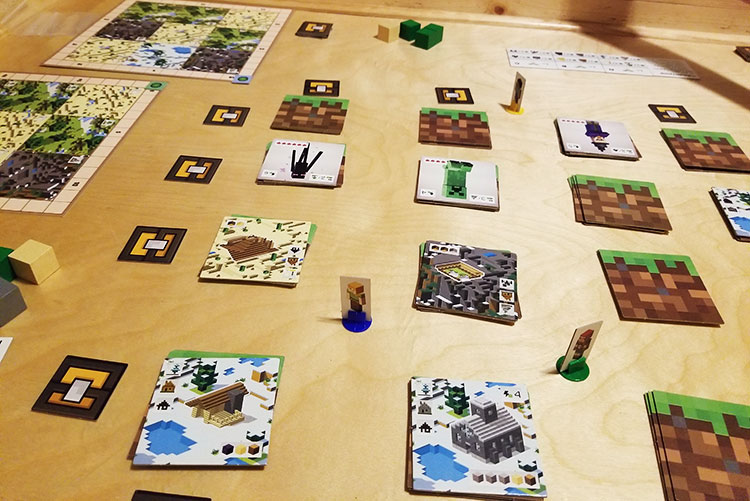 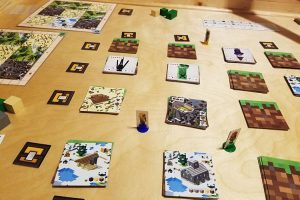 Related: What Does Absorption Do In Minecraft ? : Minecraft